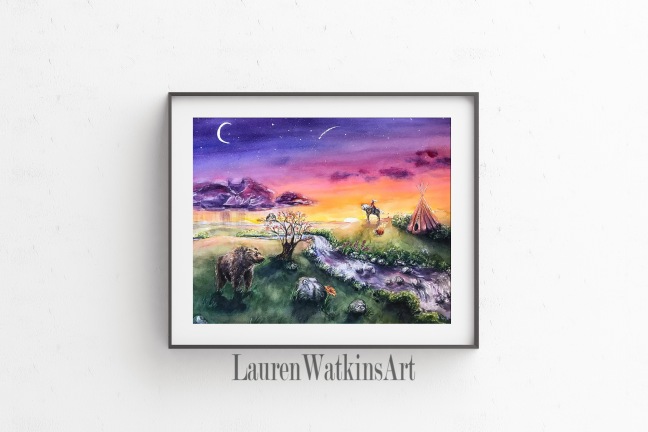 In the late fall of 2016 on of  my old coworkers contacted me to see if I would be willing or even able to do a really complex and personal idea for a painting.

She told me about how her father would make up folk stories to tell his children while on family road trips. As he started telling these legends he started to give his children symbolic names related to their personality and would use them as the characters in the stories. These stories became an important family tradition and every new family member added through birth or marriage received a new name that was woven in to the family legends.

Her painting idea was to have a realistic nature painting that incorporated all 23 names in a cohesive manner. Some of the names like “Bear”, “Cascading Falls”, and “Many Bends In River” were pretty straightforward in what they could be represented by in the painting. Other names were more abstract like “Sky Writer” and “Secret Whisperer” which required me to come up with something that would accurately represent each person and why they were given that name. Another challenge was that although some of the names had a straightforward visual representations connected to them they were difficult to incorporate into the picture in a cohesive manner and had to be modified.

As you can imagine that with complex nature of this painting it was going to take a while to figure how to represent the each name, how to balance the layout, find reference photos for each item, and paint it in a manner that made it look like a unified painting and not like elements were just copy and pasted together. I had to spend a day just figuring out how I was going to do the lighting on the painting because the painting had a lot of back lighting from a sunset that was in the painting to incorporate the name “Sunset Cruiser”. I had to figure out how the back lighting would affect each element in the picture because more often than not my reference photo wasn’t a picture with back lighting. I also couldn’t let the backlighting from the sunset cause too much silhouetting and darkening of the foreground because all the name elements in the foreground still needed to be prominent.

This took months of back and fourth brainstorming with my friend, moving states for me (and countries on her part), adding more names (their family is still growing), and learning various watercolor techniques I knew I would need to paint this project. I was finally able to complete the painting in the fall of 2017.

This painting stretched me as an artist and pushed me outside my comfort zone in every way. For a while I had a lot of anxiety when I thought about this painting. Some of the anxiety was because I knew I needed to develop my skills as a watercolorist before I would be able to paint it well. But most of my anxiety and fear came because  I knew how much this painting meant to the family that commissioned it and I didn’t want to disappoint them. Thankfully, with a lot of prayer, practice, and time to work on this painting we ended up with a finished product that we were all happy with.

The family was able to give it to their dad for christmas and later told me the painting brought tears to his eyes. That is the greatest compliment I can be given about my work. I want the art I create to bring feelings of love, joy, happiness, and peace and its thrilling when I succeed. 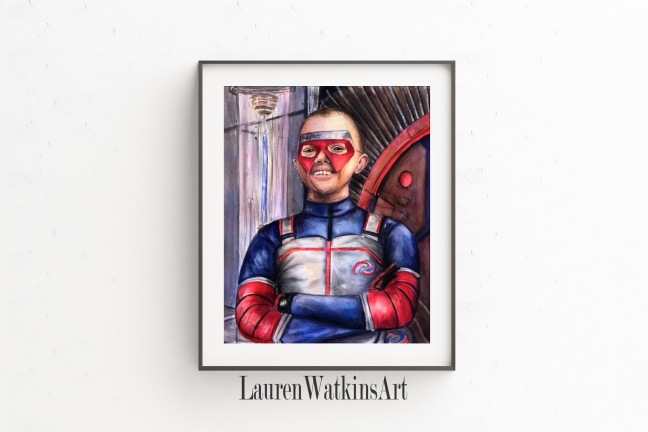 My Last commission of the 2017 was of a little boy dressed as his favorite superhero, Henry Danger.

The idea of this painting was so fun that I was willing to push myself outside of my comfort zone to do it. I am a not very comfortable with painting portraits in watercolor. In fact it had been well over a year since I had painted any and they were all mixed media pieces. Meaning I only used watercolor for the base layers of the face and then added details with markers and colored pencils.

Thankfully, my skills with watercolor in general have improved greatly over the past year. My ability to mix colors, glaze, and control the brush have improved with my daily practice. These skills are a must when doing a portrait. Color mixing is particularly important when making skin tones because it is really easy to make skin look murky or too orange. Because I was in such unfamiliar territory with this painting I scheduled myself plenty of time so i could do multiple practice pieces if needed. Thankfully, As I worked on the first practice piece my fears of doing a portrait immediately subsided because it was coming to me so much more easily than the last time I had painted one.

I still have a long way to go in developing my skills in portraiture to where i want them to be but I am proud of how far I have come.

This painting brought back memories of my years babysitting three little boys and the superhero games we would play. We would often dress up as superheroes and run around the house, pretending to save the day. We would even pretend to fly by jumping from one beanbag to the other.

Kids are so magical with their imaginations, self-confidence, and energy. It was fun creating a painting that perfectly embodied the imagination of this little boy.