A few weeks ago I was able to complete an autumn themed house painting. This painting was really fun to work on because autumn allows me to use more colors than I traditionally get to use in landscapes. I love it when I can pull out my full Chroma red, orange, yellow, greens, teal, and violet pastels and use them quite liberally.

While painting a home seems pretty straightforward they can actually have their own unique set of challenges. For example, a reference photos might be set in the wrong season and I have to figure out how the yard and house would change with it being winter instead of summer. This commission in particular had several challenges. My reference photos were from the summer and the painting was supposed to set in the fall. I also needed to age the landscaping up. The home I was asked to paint is only a year old without any mature trees in the yard. So I had to research the types of trees they planted in the yard so I could paint them to resemble how they will look in the future. I also had to adjust where some of the landscaping was in the yard including the fence so it didn’t block too much of the house. I also removed the shop behind the house and the neighbor’s home on the right. The extra buildings were distracting and removed the focus from the house.

Like I always do with commissions or complex pieces I used a quick sketch to work through any potential problems. Doing the sketch I was able to figure out the sizing for the house, proportioning of the trees, how I want the branches to grow, sky to look, and shadows with the sun setting on the left side of the house.

Thankfully, the final piece ended up being over 4 times the size of the sketch and was more able to accommodate detail. The texture and detail of the house was more important on this home than on my previous home paintings. Because this house has rock, brick, and stucco it was really important to differentiate the difference surfaces so that the house didn’t look flat. When a home is all siding its really easy to imply the surface with just a few horizontal lines.

Lately, I have been into adding unusual colors in in areas of the painting toward the end of the painting process. With this autumn scene I really loved the effect that teal, bright purples, and royal blues had in the shadows. I particularly loved what it did to the shadow side of the tree trunks. It kept them visually interesting without being distracting.

I was really excited to with how this painting turned out and was excited to give it to its new owner in person. Seeing her face light up when looking at is the reason why I paint.

I wish I had had a chance to get a better picture of it before I delivered it but my tight schedule didn’t allow for me to wait for natural lighting (an increasingly scarce resource with winter setting in). The colors in this picture are even more stunning in person.

As a kid I went to my Grandparents home almost everyday. I even went on vacation with them. Words can’t describe the love and appreciation I have for them. Their influence helped me to become the person I am today. 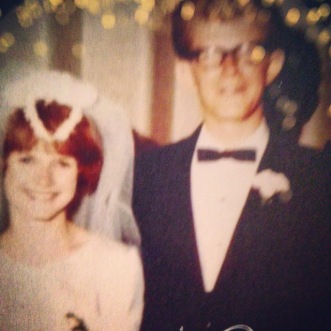 I was my Grandmas shadow, following her wherever she went and “helping” with whatever she was doing. This included volunteering at the local nursing home. I watched as she cut and styled the hair of the residents, painted their nails, and danced with them when the local band would come play. I learned how to cook, garden, bottle peaches, sew, repurpose furniture, and how to make house work more fun by playing dancing music as loudly as possible. To this day I get the sudden urge to “dance clean” when any Bee Gees song comes on the radio. My creativity and fearless nature in learning new skill was cultivated by my grandma who demonstrates it daily.

My Grandpa worked in the car industry for many years but when I was seven he decided to change career paths and start a cabinet company next door with his sons. This career change allowed me to spend even more time with my grandpa. I remember going over and “helping” him build the cabinet shop. This included me picking up nails, stacking scrap wood, painting the siding, and sweeping up the sawdust. When the next door neighbors needed help redoing the irrigation system for their alfalfa fields my grandpa handed my brother and I a shovel so we could go help him dig the trenches for the pipes. He taught me how to shingle a roof when he was hired to do an addition to a neighbors home. As hard as he had us work he always tried to teach the concepts of working hard, finding satisfaction in a job well done, and playing hard when the work is done. He would often let us pick out a drink and cookies from the gas station on our way to the dump. Or when we finished a big project he would teach us how to ride their three wheelers.

The holidays are always a magical time but it was especially magical at their home. The Carpenters, Johnny Mathis, and Nat King Cole Christmas albums would be blaring out of their living room speakers while my grandpa set up the tree and my grandma decorated the house. The house would be filled with the smell of treats cooking for neighbors and upcoming family dinners.

Christmas Eve was the peak of excitement. Every year we would drive down the street to their house just as the sun was about to vanish behind the mountains. The Christmas tree could be seen sparkling from their big living room window. All the lights would be reflected on the snow. That warm glow meant I was about to spend the evening eating homemade rolls, a delicious dinner, playing with cousins, and opening the Christmas pajamas made for all the grandchildren. After the celebrations we would find make our way out to the chilly car, ready for a night of sleepy anticipation for Santa’s arrival.

Last year when my aunt called me about doing a Christmas themed painting of their home as a family gift. I excitedly agreed. I have never known more clearly what I wanted a painting to look and feel like more in my life. I wanted it to convey the warm, colorful, joyful feelings of Christmas Eve that I experienced arriving at their home as a child.

I started the process by doing a practice drawing of their home. This was important because I had never drawn or painted a house before and was still pretty new to using soft pastels at the time. The study allowed me to work through which colors I wanted to use, how to do light reflecting onto the snow, and the order to apply the pastels to achieve the look I wanted.

I ended up finishing the painting on Christmas Eve. When it was finished I was giddy with excitement because the painting had turned out exactly how I wanted it to. Looking at the painting sparked those feelings of the joy, excitement, and love I felt in their home as a kid.

I felt that same joy and excitement when I watched them open it on Christmas day.